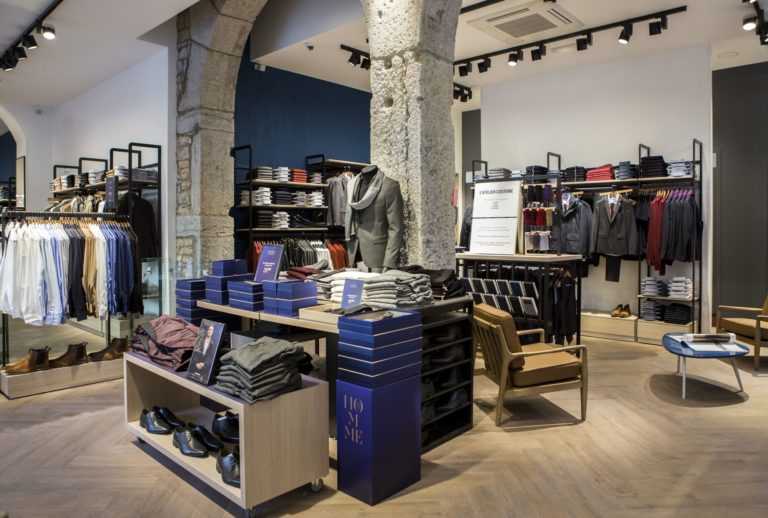 After arriving at La Défense, the men’s ready-to-wear label is gaining momentum by opening a store in the centre of Lyon. And by multiplying the service proposals.
This Thursday evening, December 14th, cocktails and a DJ will be on the menu of the new Devred 1902 store, inaugurated Rue de la République in Lyon, the first in the city centre. In addition to the public, influencers are also expected. The day of its opening, December 7th, a delivery bike offered coffee in the neighbourhood in the name of the men’s ready-to-wear brand.
If the brand doesn’t have the means to make heavy advertising campaigns, it compensates by a dynamic marketing, to be better discovered by the inhabitants of the big cities. In September, to create a surprise at the opening of the store at “Quatre Temps”, at La Défense, a real model was exposed in the shop window. While inside, a magician performed magic tricks.
“We want to gain notoriety and visibility », says Elisabeth Cabrera, Marketing and Communication Director.”
Maintaining the proximity
The brand, founded in Amiens in 1902 and which now belongs to the Omnium group from Brest, saw its turnover increase by 5.5% in 2016, to 227 million euros excluding taxes. Our strategy of proximity is paying,” says Elisabeth Cabrera. One of the keys to success indeed relies on local implementation in medium-sized cities. Today, the brand has 325 stores in France and internationally, of which two-thirds are owned.
Seeking to encourage communities on a local level, Devred encourages each store to have a Facebook page and its own Instagram account to share information with its customers, share its private parties … At a global level, to establish its image, Devred also invests more and more in social networks. The brand has also led a collaboration on Instagram with the trio Les Mauvais Garçons.
A relational program is being tested in two regions and some 30 points of sale, before a wider deployment in 2018. It involves adding services such as home delivery, clothing alteration, or previewing the collections rather than having a promotional approach. Two levels of loyalty are available, depending on whether the program is free or not. With the goal of personalising the relationships.
Mingle codes
If the brand wants to be accessible, it has nonetheless introduced luxury codes. A work around the showcase is implemented. “You have to be more aspirational, more theatrical. We seek to transmit emotion in the points of sale “, indicates the marketing director, who came from the luxury world. Another axis: the capsule collections to create a different tone. One of the latest capsule collection was made with the accessories Le Flageolet around reversible butterfly knots. To highlight this “Capsule Saint-Germain”, Devred had chosen Baptiste Gourden, a young writer.
Devred has also launched complementary brand strategies in stores. It offers Komono sunglasses and watches. The introduction of a similar strategy for cosmetics is under consideration. « Nowadays, we see the influence of concept-stores everywhere, » says Elisabeth Cabrera.
Play with the individualisation
The house has also set up in some stores a Custom Costume Workshop. With 26 models of jackets, 36 materials and a wide choice of finishes, the possibilities are endless – even if alliances are recommended to avoid a lack of taste. With price ranges stretching from 300 to 550 euros, the proposal is quite high-end. By the end of the year, 20 stores will be equipped with this space, and probably 150 by the end of 2018. It is indeed necessary to have the adequate customers as well as the employees to accompany this distinct apart.