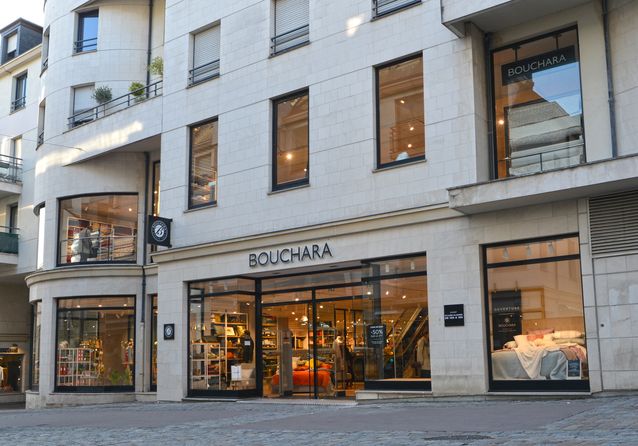 The brand, known in the 80’s for its fabrics, has a second life. It retrieved 80 Eurodif stores, property of the same family, to offer decoration and interior textiles, brought up to date.
TEXTILE. Like a phoenix, Bouchara is reborn. The familial group from Brest has chosen to remove its clothing brand and low-cost decoration and to change its 80 stores from Eurodif to Bouchara. An unprecedented metamorphosis, at a time when so many chains reduce their operations, like La Halle, or even disappear, like Mim. This transformation is even more astonishing as it was done in a record time, without any losses.
“Based on the president’s idea, Claude BUFFARD, we have taken this decision together and the changes were done between June and September” says Robert Lascar, President of Omnium. The group, which owned Eurodif, still has two fashion brands: Burton of London (135 stores – mixed brand) and Devred 1902 (330 stores – men’s brand). Their good results carry the whole group, allowing it to remain in growth in a difficult market.
A very popular universe
Omnium bought Bouchara in 1992, but significantly reduced the number of stores from 24 to 3. Forced to restructure financially, following the acquisition of Maxi Books in 1998 and its disengagement of the company in 2006, Omnium is resolved to sell thresholds of Bouchara and Eurodif. But it had preciously kept the Bouchara brand. It then successfully redeployed his Bouchara outlets in Eurodif stores.
Adeline de Monpezat, Robert Lascar’s daughter, directed Bouchara’s return, which she also owns. Bouchara’s great comeback, after a partial eclipse, is a big challenge. It is a strategic change, as booming as it is demanding. It was achieved thanks to the huge investment and the motivation of the Eurodif’s President and teams” emphasises the manager.
Before returning to the forefront, Bouchara was profoundly transformed: in the 80s and 90s, the brand was best known for its fabrics, sold mostly by the meter. Many Bouchara stores then gave way to the new kings of “fast fashion”, with Zara at the top.
Adeline de Monpezat and the Eurodif central purchasing then ramped up and extended the range of table textiles, Bouchara household linen. A very popular universe was then added: simple and cosy interior design. Successfully exploited by Zara Home, Maison du Monde, Adeline de Monpezat wanted to enrich the range of tableware and clothing to improve the universe of “an iconic brand for everything related to household, decoration and which remained present in everyone’s minds.”
So many complementary universes, renewed according to trends, and finely scripted in the new Bouchara boutiques. The revival is also very strong in communication. A very playful campaign is in full swing, especially on social networks. With photos of cosy lounges with trendy tones this fall like petrol blue, dark green and mustard touches. But also, cashmere ponchos and other comfortable and qualitative items which is inviting for a seasonal cocooning.
Before executing this radical transformation of dozens of Eurodif outlets in Bouchara boutiques, its owners tested the concept in Dijon for a year, which was successful. One way to undertake the transformation by limiting the risks. It was not easy to replace, in such a short time, a very cheap ready-to-wear and decoration offers to the Bouchara range, which is more stylish and more expensive. The customers accustomed to Eurodif may have been be surprised by the change … “In reality, the transition went very well, attracting new customers, especially young people,” says Adeline de Monpezat. “We didn’t have a fall in the turnover and managed the transformation in this respect too,” adds his father, proud of “this achievement, this revolution.”