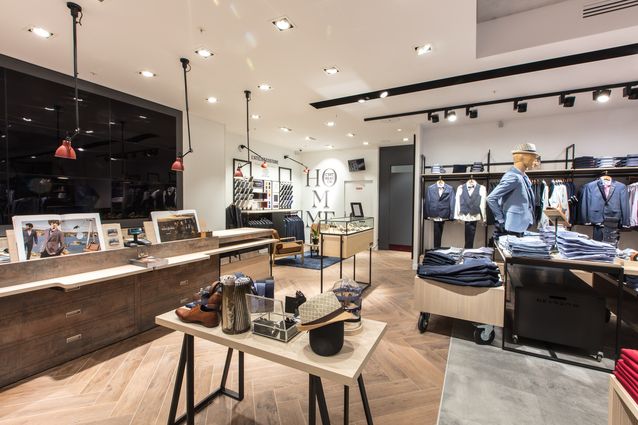 The brand programs around 20 openings in 2018

Devred 1902 modernises its park. The men’s fashion brand, which unveiled a new digital store concept in Nantes last spring, already has 30 stores opened or converted in this format, including a personalised suits workshop. It will continue its journey by inaugurating new points of sale, in France and internationally.
What is the roadmap of Olivier Viola, commercial director of the Omnium Group brand? “Open twenty addresses in France in 2018, or fifteen affiliated stores and three to five branches in premium locations.” At the end of 2017, the Devred 1902 network will total 323 points of sale in France, including a new store in Lyon, which will open in December. A point of sale of 200 square meters, located in a very commercial street (Rue de la République, n°55). In September, a flagship opened in the commercial centre “Les 4 Temps” in La Défense.
“We still have about 70 slots to conquer in France”, judges Olivier Viola. “The goal is not to reach the 500 points of sale, but simply to complete our network. We receive a lot of membership applications, but there are few elected.” Relocation of existing stores is also a major issue. “The cities are changing and imposing us continuous watch. A painstaking work as each case is different, confides the manager. Today, it is much more difficult for us to be in city centres, in areas that are not number one. We are also moving towards retail parks.
The international conquest is a recent one for Devred 1902, which took its first moves out of France in 2012. With 15 addresses abroad, the brand has accelerated this year with two partnerships established in the Middle East and in Guatemala. The first store resulting from the partnership with the Emirati group Amidt will open in early December in Tehran, Iran. Dubai is on the list for 2018. Finally, in Algeria, a second store will be inaugurated next year by its local partner in Oran. Closer to us in Europe, Olivier Viola plans to “reinforce” Devred’s presence in Belgium, Luxembourg and Switzerland, neighbouring countries in which there is still a lot of potential”.
Although physically present, the male brand, which intensifies the renewal of its collections in stores, remains a shy actor on the e-commerce side: its online sales represent 1.5 to 2% of its total sales, established at 274 million euros in 2016. “We need to strengthen our multichannel position and catch up. In the future, we aim for 3 to 5% of turnover generated online.
According to the sales director, Devred 1902’s like-for-like business is progressing, “standing seven points above the men’s ready-to-wear market”, even though he is being cautious for 2017 as the brand achieves 20% of sales in the month of December alone.
Marion DESLANDES
FASHION AND NETWORK